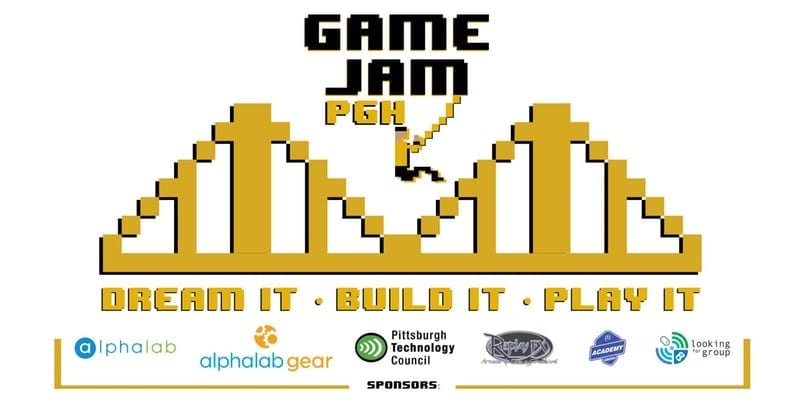 Learn about new games in Pittsburgh

Recently, Academy Pittsburgh and Looking for Group hosted the first round of a 48 hour hackathon called Game Jam PGH.   The event encouraged avid gamers with crafty ideas and a diverse set of skills to collaborate and ultimately, create a game. From Friday June 23rd through Sunday June 25th, participants began to put together a game with hopes of qualifying for a round of judging, taking place on Friday June 30th.

Black Hole Bullet: Allows up to 4 players to shoot at each other as they rotate around a sphere using centrifugal forces to aim around a centered black hole.

On Friday, June 23rd, Game Jam PGH kicked off with a preliminary round of game pitches followed up with an evening of participants getting acquainted with one another and forming teams. Participants determined which potential idea they wanted to pursue and started laying out the foundation for their game.

Over the next three days, designers, programmers, and gaming-connoisseurs joined teams or worked individually to create a game. Teams had spent upwards of 80-100 hours combined to brainstorm ideas, program their game, and put together the necessary AV setup to present it to an audience. Participants were allowed to design either a digital or physical game, each with their own respective challenges to overcome.

Congrats to the 1st place winners, Beach Stompers! A game that lets users jump on different floating platforms while trying to defeat their opponent by landing or “stomping” on them.

By Sunday evening, the first round of Game Jam PGH had come to a close with 14 teams eligible for the next round. On the following Friday at AlphaLab Gear, the qualifying teams reunited to present their games to an audience-oriented round of judging. When all was said and done, the votes were tallied and winners were announced.

First, second, and third place were awarded to Beach Stompers, Black Hole Bullet, and Season of Arena: Champions of the Spire, respectively. Beach Stompers will use their winnings to continue their work for ReplayFX, a renowned gaming convention coming to Pittsburgh on July 27th-30th in which they will compete as a tournament game.

Thanks to our sponsors from AlphaLab, AlphaLab Gear, and the Pittsburgh Tech Council to help make this event possible.